INDIAN SURF CULTURE IS IN ITS INFANCY. The surfers paddling out from the long, white beaches of Mangalore to the candy-striped lighthouse of Kovalam are the first generation to put feet to wax, and they love the sensation.

One of these surfers is 23-years-old Kiran Kumar. He is one of India’s few native surf ambassadors, and the only person i have associated who has a rattail. Couple that with his knowledge of Indian surf break and he becomes triple threat, if there ever was one. The Unlikely Roots And Atypical Growth Of Surfing India

By Todd Prodanavich In Surfer Magazine.

INDIAN SURF CULTURE IS IN ITS INFANCY. The surfers paddling out from the long, white beaches of Mangalore to the candy-striped lighthouse of Kovalam are the first generation to put feet to wax, and they love the sensation. One of these surfers is 23-years-old Kiran Kumar. He is one of India’s few native surf ambassadors, and the only person i have associated who has a rattail. Couple that with his knowledge of Indian surf break and he becomes triple  threat, if there ever was one.

With a decade of surf experience under his belt, Kiran is harden veteran by local standards. But like the nation’s surf scene as a whole, Kirans’s beginnings as a surfer are unusual to say the least. “My parents were Hindus, seeking to answer the question in their lives, like what is purpose of having human life? Why are we here in this material world?”  explains Kiran. They eventually found their the Spiritual answer at a the Krishna Temple in Sri Ranga Patna, where they met the temple guru, Narasingha Maharaja. Contrary to any mental image you may have, this guru is a white guy from Texas, a devout surfer, and born by the name Jack Hebner.

Jack picked up surfing while living in Florida during the 60s  and he picked up being a Hindu spiritual leader sometimes after that. He as been living in India since the 70s and dedicated to throw some stoke into religious doctrine. After all, if Hindu deities sculpted the earth, they surely carved out epic barreling sandbars for a reason.

With their parents’  blessing, Kiran and his brother Kishore moved into Narasingha Maharaja’s Ashram, and embraced path of  spiritual devotion and wave hunting. At the age of 13, Kiran was given a brand new craft from his guru, and the seed was planted. Swami and his close associates, Babaji [born Rick Perry], introduced surfing to my brother and I front of the Mahabalipuram temple near Chennai,” recalls Kiran. “My brother and were shocked to see how surfing is done in the water- we din’t think such things existed. Thats when Swami told us we should have a surf ashram. For a  perfect place, we began to search from Chennai all the way to down to Kanyakumari, and all the way up to Mangalore. We checked out all the surf spots and marked them on the map. Then in 2003 we ended up buying a property for the ashram in Mangalore, right in front of an amazing river mouth and undeveloped area. That’s were we formed Mantra Surf Club.” Now the ashram is the home of the Swami, Kiran, his brother, and their friends and family -all Krishna devotees, and all surfers. But their home also serves as a place for people to experience surf enlightenment without necessarily delving into a spiritual episode. Kiran and his Brother host traveling surfers in the ashram, and operate India Surf Tours. they’ve escorted everyone from Craig Anderson to Kalani Robb around the subcontinent, but would just as soon take you or I on a mission of stoke.

Traveling pros looking to get unique photo’s isn’t anything new for India, but the emergency of local surfers is, “Everything has changed since I started surfing with Swami’s. Apart from us, there were no surfing clubs or India Surfers when we started out. Now there are Four surfing state associations, and more than 10 surf schools,” says Kiran. “Overall, there are 85 native surfers in India.  We know this fact because we started Surfing Federation of India, and keep a surfer database that includes their state, their surf club, and their contact details for future SFI and ISA surf competition, I can’t imagine how it’s going to be three or four years from now. We [theSFI]  are trying hard to hold India’s first official surf competition this year or the coming year, and we will have ISA judges to judge the event.”

It’s awesome that surfing is spreading through the Indian ranks, and that the same kids who were awestruck by their first encounter with surfing just a few years ago are now dedicated surfers themselves But organized competition?

International imported judges? Big Brother databases? “We believe that good things should be shared with other people,” says Kiran. “By bringing in ISA-level competition we will get maximum exposure to the public via television, newspapers, magazines, and word of mouth. We want surfing to become rooted in youth culture in India and we think that competition will inspire and impress the younger generation.”

There was a time when U.S had no surf industry, when there were just handful of surfers living on the fringes of society, and no competition-it was arguably the most exciting time to wax up the wooden plank. Now we bitch about the commodification of our culture, sit among hordes in our lineups, and debate, ad nauseum, the accuracy of ASP judging. It’s obvious that Kiran and his friends are doing what all kids try to do -grow up too fast. Their glimpses into surfing’s mainstream have made them what to be part of it, but the truth is, they already have what every other surfer in the world wants: a small, tight-knit surf community with more waves than there are surfers. 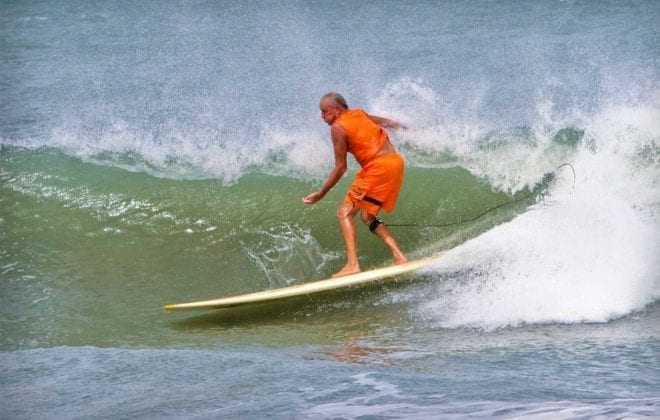 Monk sets up a monastery for surfers 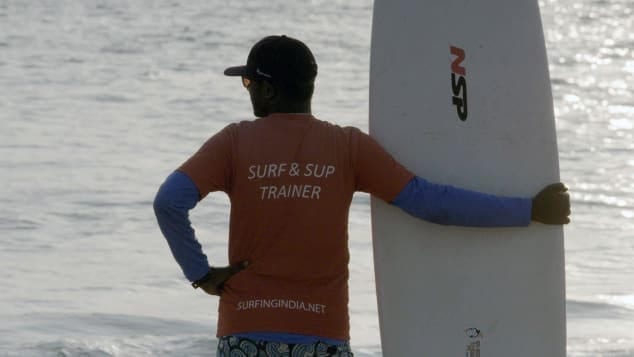