Daruka Dasa looks out at the horizon, bobbing up and down in the Indian Ocean on a surfboard. “I see a wave out there that’s got your name written all over it,” he says. We’re off the coast of the southern Indian state of Karnataka, and Daruka seems to be looking vaguely in the direction of Somalia. Wave-spotting, I learn during my first surf lesson, is an acquired skill requiring hours spent staring out to sea, for try as I might to follow Daruka’s gaze, I see nothing but a vast ocean in front of me.

Avid surfers like Daruka can see things others don’t, like a distant line of shadow moving forward on the blue-green water. That’s no great surprise, given that for Daruka and the other residents of the nearby Kaliya Mardana Krishna Ashram, surfing is a form of meditation, a spiritual practice leading to heightened states of awareness. Krishna devotees in the Gaudiya Vaishnava tradition of Hinduism, they are known collectively as the “surfing swamis”. I have come to this isolated part of southern India to see what they can teach me.

Sure enough, Daruka’s right. After about 15 seconds, I see the wave coming at me like a cavalry charge. The moment is now. Straddling the back of the board, I follow the instructions Daruka gave earlier, using my left leg as a rotor to kick myself around 180 degrees. I lean forward, paddling furiously towards the shore until I feel the wave behind me. Grabbing the board with both hands, I push myself up into a standing crouch, sticking my arms out in that cartoonish surf pose you see in old Beach Boys videos.

Nothing happens. The board fails to catch the wave, which passes under and crashes to shore without me.The moment is gone.

Daruka explains that it’s all a matter of timing. I’ve made a common beginner’s mistake: standing up too early. To catch the wave, you’ve got to keep paddling until the last possible moment, and when the wave has you – when the board starts to accelerate on its own – wait an extra second or two and then stand up. I try again. And again.

Located in the coastal town of Mulki, just north of Mangalore, the “surfing ashram” is growing in popularity. It often hosts visitors from Mumbai, who escape the madness of the city by flying to Mangalore’s domestic airport, a flight that takes little more than an hour. City dwellers hole up in the ashram for a few days to enjoy the quiet and catch some waves. Daruka Dasa grew up in San Diego but now lives at the Kaliya Mardana Krishna Ashram, where he became a disciple after visiting friends who were followers of the founder.

Coming from Mumbai, the most crowded city in the world, one is struck immediately by the penetrating silence of the surrounding palm groves. In the ashram’s courtyard, at the base of one tree sits a pile of coconuts, ready to be chopped open with a machete for drinking. A painted surfboard hangs above the entrance to the dining area, reading “Om Sweet Om” on one side, with a quote attributed to Lord Krishna from the Bhagavad Gita on the other: “Of bodies of water, I am the ocean.”

That evening, I overhear the bhajan, or worship through devotional song, emanating from the ashram’s temple room. I poke my head in, and Daruka gestures toward an empty cushion, so I sit down and try to follow along with the other residents. Gaudiya Vaishnavas practice bhakti yoga, or devotion to God in the form of Krishna, whom they regard as the Supreme Being. In practice, this means getting up before dawn to practice meditation for two hours starting at 5am, when they being their japa meditation. Chanting the Hara Krishna mantra, they focusing their attention on the sound vibration, which they believe purifies their minds and bodies. They count the number of recitations on the japa beads, ending with a reading from the Bhagavad Gita or the Srimad Bhagavatam, two Hindu holy texts.

An American who grew up in San Diego, Daruka, age 27, first came to India five years ago to visit two friends, travel, and surf the coastline. Both friends were followers of Swami Bhakti Gaurava Narasingha, the ashram’s founder. For Daruka – a.k.a. Dustin Ellison – spirituality was not the first thing on his mind, but gradually the beliefs and practices of the group began to grow on him.

“There was a particular time in my trip that Krishna consciousness began to have a strong calling and attractiveness for me,” he says. “There was something so inviting about it all, both physically and internally.” The devotees lead a healthy lifestyle, with an all-vegetarian diet, regular exercise and yoga. The inner spiritual practice consists of various forms of meditation, including the evening bhajan, which Daruka describes as “devotional chanting for the sweet absolute.”

You might wonder what surfing has to do with any of this. Surprisingly for a country with 4,500 miles of coastline and waves that reach up to six metres during the monsoon season, surfing is almost unheard of in India. It took an American from Florida to import the idea. Now in his 60s, the ashram’s guru was not always known as Swami Bhakti Gaurava Narasingha. He was originally from Florida and also goes by his original name, Jack Hebner.

Narasingha was a follower of the late A.C. Bhaktivedanta Swami Prabhupada, the Hindu spiritual leader and founder of the Hare Krishna movement, whom he met in San Francisco in 1967. Officially known as the International Society for Krishna Consciousness (Iskcon), the Hare Krishnas are familiar to veteran travellers. They became fixtures in airports during the 1970s and 1980s, often proselytising by selling leaflets, playing drums and finger cymbals, and generally drawing attention to themselves with their shaved heads and monkish-looking saffron robes.

The organisation was wracked by scandal in the years following Prabhupada’s death in 1977, due in part to what many saw as its overly aggressive fundraising methods. Many followers, including Narasingha, left the organisation without forsaking any of the beliefs and practices of Krishna consciousness. Narasingha now lives in a larger ashram on the banks for the Kaveri River in Mysore, about 230 kilometres inland, but visits Mulki three to four times every year. He now has about 200 disciples in India, including several children – my surf buddies – that are receiving a home-school education at the Mulki ashram.

Perhaps nothing exemplifies how Narasingha’s mission sets itself apart from the mainstream Iskcon movement more than the Ashram Surf Retreat, the guest surfing program opened in Mulki in 2006. The mission earns its money through a network of businesses, including web design, graphic design, a water bottling company, an art gallery, and the surf retreat. Visitors won’t find the devotees hitting them up for donations while here; they’ll simply be asked to pay the bill.

As Daruka explains it, self-sufficiency is central to the mission’s philosophy. “For us, it’s based entirely on business,” he says. “All the boys here in this ashram are learning computer design and photography. We want all the devotees to be knowledgeable in both the practical, business side of things, as well as growing spiritually. There’s a balance there and if it can all be used in the service to Guru and service to Krishna, then we’re doing it right.”

A room in the guest house costs from $67 to $87 (Dh248 to Dh318) per night for double occupancy, including vegetarian meals. Surf lessons cost $29 (Dh106) per day, and surfboard rental about $10 (Dh35). By the standards of small-town India, this is no bargain, but neither will you be living in a monk’s cell. Compared to many ashrams and meditation centres in India, the rooms are almost luxurious. Plus, with room for only four people in the guest house and rarely more than eight residents in the ashram at any one time, visitors will have the place virtually to themselves. Guests are asked to refrain from smoking and alcoholic beverages, no non-vegetarian food is permitted on the premises, and couples are requested to remain celibate during their stay. “It’s definitely not open or recommended to anyone,” says Daruka. “Our website weeds out the partiers and that kind of crowd. It’s for people who are looking for a unique spiritual experience while having the freedom to surf uncrowded waves.”

There’s no pressure to chant mantras or accept Krishna consciousness, but guests are fairly likely to catch the surfing bug. I certainly did, finally getting a few decent rides after many tries. Standing on the board, propelled ahead of the crests, one feels as light as sea foam – as though the weight of the world were suddenly lifted. But the mind tends to tire faster than the body. In what was supposed to be a moment of rest, I stop paying attention to the waves and find my thoughts drifting to shore, following what Buddhists calls the “monkey mind,” a capricious creature that jumps hither and thither beyond one’s control.

Big mistake. With the ocean at my back, a wave breaks on top of me and sends me under. I flail around, gasping for air as my nostrils fill with water. “There’s one thing about surfing,” Daruka says later. “It forces you to stay in the present moment. If you turn your back to Mother Ocean for even a second, she’ll definitely give you a wake-up call.”

For decades, Westerners on the hippie trail have come to India looking for such a wake-up call. The Beatles’ George Harrison famously became a follower of Prabhupada himself. An often facile fascination, this has given birth to a spiritual tourism industry that peddles enlightenment like so many cheap trinkets. In this land of sadhus, cranks and dharma bums, one tends to built up a healthy resistance to spiritual remedies offering an exotic soul-cleansing.

So the very idea of “surfing swamis” might seem comical or even outlandish to some. It’s not. One need not be a devotee of Krishna or study the Bhagavad Gita to learn something at the Kaliya Mardana Krishna Ashram – something more than surfing, even. On these stretches of white sand, or beneath the shade of palm trees, one finds nothing more and nothing less than a simpler way of life.

And as Daruka points out during one of the long lulls between swells, riding the waves is only a part of surfing’s appeal. There’s a rush of adrenaline when you finally mount that wave, yet it seems about 90 percent of your time is actually spent waiting for the next one. Surfing is as much about spending time with nature – call her Mother Ocean if you like – clearing one’s head of mundane clutter, and hanging out with kindred spirits. Actually, that’s not a bad metaphor for spiritual pursuits, for as many meditation masters have taught, “The path and the goal are one.” I turn my gaze the ocean again, searching in vain for the next wave. 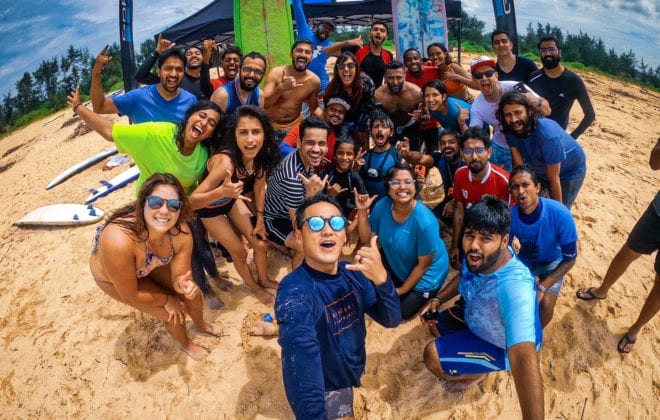