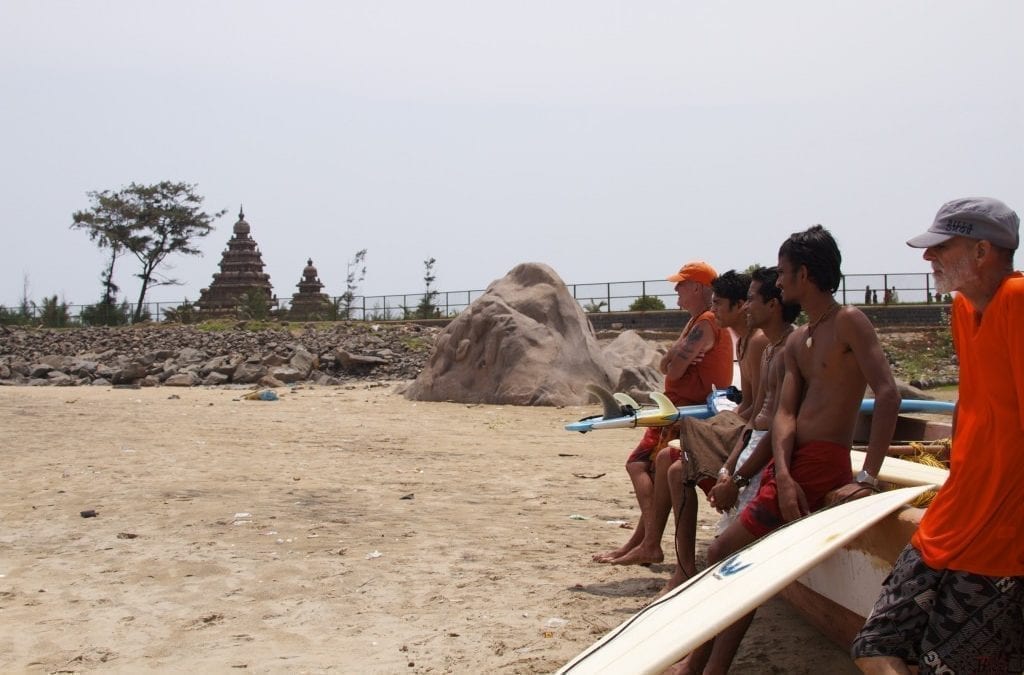 MULKI, INDIA — The shore is empty. The sharp morning sun cuts the water into diamonds. For the guru and his pupil, the surf beckons.

“There are more than 1.2 billion people in India. How many people do you see in the water? Hardly anybody,” said the guru, Jack Hebner, 70, a tall American known as India’s “surfing swami.” He gestures toward the pristine sweep of sand. “All these waves are waiting to be ridden. India is a surfer’s paradise.”

With more than 4,000 miles of undeveloped coastline, India is emerging as the newest and perhaps the last frontier for international surfers who travel far in search of empty waves.

In recent years, surfers tired of battling crowds in hot spots such as Hawaii, Bali and Australia have turned to deserted beaches on India’s southern shores for small surfing events. More than 100 surfers will gather in the southern state of Karnataka this weekend for an international competition. India has more than 400 regular and 1,500 vacation surfers, according to the Surfing Federation of India.

Although India does not always have epic Bali-size waves, the coastline here picks up a lot of swell from the Indian Ocean and the storms in the Bay of Bengal, surfers say. During the monsoon months, waves reach 8 to 12 feet in some places.

Hebner is one of Surf India’s earliest practitioners and perhaps its biggest booster.

Twelve years ago, he set up India’s first surfing school, popularly called the surfing ashram, in Mulki, a town near the port city of Mangalore. Since then, he has taught hundreds of Indians how to surf — an accomplishment in a country where cricket is king and beachgoing is not a common leisure activity.

Before the surfing swami set up shop, Mulki was a nondescript coastal town known more for its annual water buffalo race and spirit-dance rituals. Now, Bollywood stars, cricket players, billionaires and hundreds of middle-class professionals from all over India have visited the ashram to learn surfing.

“Fishermen’s children and city millionaires sit down and eat together at my ashram, with a surfboard between them,” Hebner said.

For teenage girls here, surfing is also an act of defiance against traditional Indian culture.

“My father said: What if you tan too much while surfing? What if you fall and get a bruise on your face? Who will marry you then?” said Aneesha Nayak, 15, who has won three bronzes in surfing competitions. “Marriage is not the only goal for a woman. What about other dreams?”

A 16-year-old surfer, Tanvi Jagdish, said she took up the sport after her cousin said surfing is a “boys’ thing.”

“Surfing has given me a loud voice to speak back to the society,” said Tanvi, who is set to participate at a surf event in Vancouver, B.C., this year.

She recently inked the words “SURF” into the henna design on her palm, a popular trend that women usually reserve for the names of their fiances or grooms.

“People say only boys should wear shorts. They say if a girl is seen wearing shorts, then it means she has gone out of control,” Tanvi said. “But I wear my surfing shorts everywhere. The surfing guru taught me how to push my limits in the water. I have learned to do the same on land, too.”

For years, the surfing-obsessed Hebner wandered the world, chasing the waves and looking for unexplored shores.

He was a military brat who grew up in Jacksonville, Fla., learning to surf at age 12 and working at a surf shop in high school. As an adult, he embraced the hippie ethos of the 1960s, living in a commune in Hawaii. He eventually eschewed meat and alcohol, and joined the Hare Krishna movement.

Over the years, some of the other devotees in his movement scoffed at his devotion to surfing, calling it “maya,” or an illusion. But his guru blessed him with the title of sanyasi — holy man — in 1976.

After living and traveling in India for extended periods, Hebner finally set up his surfing school in Mulki in 2004, drawn to its pristine beach so remote that it once could be reached only by boat.

Surfing can be a multimillion-dollar industry for India, Hebner said. International surfing pros such as Craig Anderson, Mitch Coleburn, Chippa Wilson, Pat Curren and Dave Rastovich have come to surf in India in the past eight years.

“The surf world has found India,” Hebner said. “Now we are waiting for India to wake up and discover its own potential as a surfing destination.”

The sport’s emergence is dovetailing with the rise of adventure tourism and sport generally in India, brought about by an increasingly youthful population with more disposable income. The number of foreign tourists visiting India for adventure tours tripled in the past decade, up from about 30,000, according to the Adventure Tour Operators Association of India.

In the past three years, many states have tried to boost tourism by organizing competitions in adventure sports such as mountain biking, paragliding, ice climbing and kayaking. Much of the branding in regard to surfing in India has been built around yoga, meditation and fusion music.

“Two-thirds of Indians are below 35 years old. With rising affluence, they now have the disposable income and the desire to explore the outdoors,” said Apoorva Prasad, founder and editor of the Outdoor Journal. “Earlier, all the adventure sports industry was entirely geared toward attracting foreigners. But the change now is that Indians themselves want to do it.”

There are now 15 surfing schools in India, and the Surfing Federation works with them to introduce standard safety regulations and coaching requirements, said Kishore Kumar, its president.

The government has yet to recognize surfing as a sport in India, Kumar said, and that impairs potential public funding for surfers. The matter is further entangled in the usual bureaucratic maze. The rules say that at least 12 Indian states must have local surfing associations for the activity to be recognized as a national sport, but only nine Indian states even have coastlines.

Safety is also a big issue.

“Our beaches do not have enough lifeguards,” Prasad said. “We don’t have a good rescue and medical infrastructure. Adventure activities are excluded from insurance.”

Accurate maps of many trekking routes and coastlines are unavailable. It is difficult to possess a satellite phone device. And adventure sports equipment is not easily attainable. Many of the international outdoor recreation brands are unavailable in India, so sponsorship is hard to come by for competitive events.

But surfing schools are packed with students.

“The instructors at the ashram cook for you, serve you, speak to you very gently. They do not teach it like a sport,” said Nandita Abraham, 49, who trained in December. “It is like they have found supreme happiness in surfing, and they just want to share that happiness with you.”

This weekend, Hebner’s tucked-away beach will be crushed by thousands of visitors when the international competition comes to town. But he is not worried about losing his spot.

“Maybe it is time to give it up. Maybe we know of other secret surf spots in India that are 10 times better with crystal-clear blue waters and super-glassy waves,” he said with a wink. 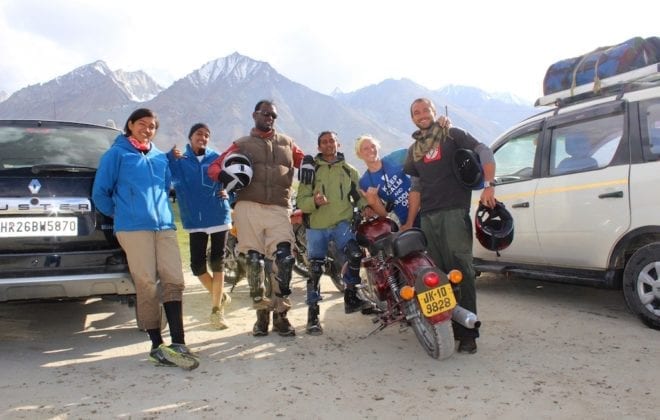 Stand Up Paddling In The Himalayas 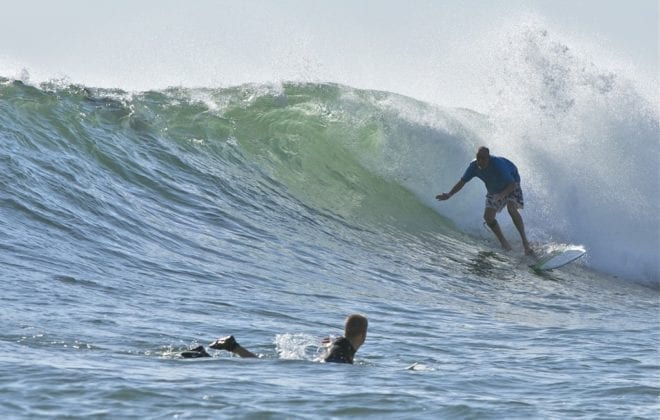 Surfing Swami: Interview with the Wave-Gliding Guru of India